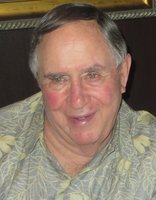 Don, 82 passed away peacefully on August 13, after a long battle. Son of the late Herschel and Muriel Shwayder. Adoring Husband of Arlene (Snookie) Shwayder, for almost 62 years. Dedicated father to Kerri (David) Shwayder Greenberg, Bonnie (Jack) Shwayder Kassell, the late Scott (Justyn) Shwayder. Brother of Kenneth (Nancy) Shwayder. Supportive Papa to Alison (Clayton) Millice, Zachary (Erica Orvis) Greenberg, Kendra Kassell, Kelsey (Justin) Oliver, Kodi (Matt Sylvester) Kassell, Cole Shwayder and Julia Shwayder. Proud Great Grandpa to Lawson and Riley Millice and Archie Oliver. Don went to East High School, Dartmouth College, and University of Denver, College of Law. He started his law practice with Rothgerber, Appel and Powers, and then worked with Isaacson Rosenbaum. After 30 years, he then worked as an independent arbitrator/litigator. Don was an avid sports fan who got to see the very first Denver Broncos Football game. He was also an enthusiastic golfer and world traveler. He kept in contact with his many East High School friends (The Debonaire's), continuing to meet up with them at least twice a year, and his Dartmouth buddies, seeing them at least 4 times a year. Don played in the same poker game for 50 years! Don was a fourth generation Colorado native who personified his pioneering family’s business and life motto” Do unto others as you would have them do unto you”. He was always active in the Denver community, serving on the board of Rose Hospital, Omni Bank, and the Anti-Defamation League, among others. Papa Don was the best possible patriarch for the Shwayder family. He was kind, accepting, and good natured-all while delighting in, and being amused by, the many eccentricities of his family. He was generous, loving, and thoughtful; always making those around him feel like the most important person in the room while listening intently, and guiding with solid wisdom and advice. Among the many things that he will be remembered for was his wisdom of eating an ice-cream cone by biting the bottom first, his endearing yet not-so-silent naps in a chair, and his kind and loving laugh that was infectious to all. Private service will be held. The family will be observing Shiva at the home of Arlene Shwayder Thursday, August 15th and Friday, August 16th from 1-8 pm. Suggested Charity is the Helen and Arthur E. Johnson Depression Center