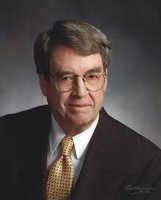 Edward Lewin was born in Denver on August 10, 1929 to Morton Lewin and Harriet Reuler Lewin. He graduated from the University of Colorado and then from the Washington University School of Medicine. In 1954, he married Jacqueline Shere, also of Denver. They had two children, Cynthia and John. Ed completed his medical training in Neurology at Johns Hopkins and Boston City Hospital, followed by a stint as an Air Force physician in California and Texas. Jackie and Ed then moved back to Denver where Ed spent his career at the University of Colorado Medical School and the Veterans Administration Medical Center, where he was Chief of Neurology. His career combined clinical care, teaching, and research. He maintained an active research laboratory where he studied animal models of epilepsy in order to better understand the mechanism of the disease. He combined his research interest in epilepsy with clinical care of veterans and others with the disease. Ed loved patient care and prided himself on his ability to connect with a wide range of patients. In 1999, he received the inaugural Epilepsy Foundation of Colorado award for his achievements in both research and clinical care. He received numerous other honors and awards in his field. After retirement, Ed continued to serve as a volunteer physician at the VA. He was proud to be able to give back to his field by endowing a professorship, the Reuler-Lewin Family Professor of Neurology, at the University of Colorado. Outside his profession, Ed was a committed athlete. An excellent skier, he took full advantage of the Colorado discounts for seniors, skiing well into his 80s. He also enjoyed tennis and road biking. In addition to the classic Colorado mountain rides, he was a frequent sight biking around town, including to work most weekdays. Ed earned his pilot’s license and loved flying his four-seat Piper around Colorado and neighboring states. His passion and adventures together with his wife inspired her to write a mystery series set in the world of general aviation, beginning with Murder Flies Left Seat. In addition, Ed was a passionate amateur astronomer, traveling to China to see a solar eclipse. For many years, he was a docent in the astronomy section of the Denver Museum of Nature and Science, and delighted in engaging with visitors, especially schoolchildren on field trips. He also enjoyed strumming his banjo. Ed was known for his dry sense of humor, his razor-sharp mind, and his astonishing memory. He could recreate football games he had seen decades earlier, and was a Jeopardy fiend. A point of pride was that he could still name the county seats of all 63 counties in Colorado. Whether he ever fully adjusted to the creation of the 64th county, Broomfield, in 2001 is unclear. Ed deeply enjoyed his children and grandchildren and took great pride in their accomplishments. He is survived by his wife of 65 years, Jacqueline; their two children, Cynthia Lewin of Arlington, Virginia, and John Lewin of Denver, Colorado, and their spouses, Arthur Fox and Rebecca Lewin; and four grandchildren, Mira, Monica, Robert, and James. His sister Celeste predeceased him. Donations may be made to the Denver Museum of Nature and Science or to a charity of choice.