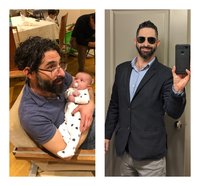 Harris Michael Kaplansky, born September 12th, 1982, in Brooklyn, New York, passed on March 31st, 2020 in Denver, Colorado. His family remembers him as someone who loved to entertain, his relentless quest of knowledge, his intellect, and most of all, to dance to Phish. He always marched to the beat of his own drum. Harris brought joy to all who knew him. He was a voracious reader, wrote poetry, painted and concentrated his reading on his two favorite subjects; politics and science. He was wiser than his years and could offer a theory to explain just about anything. From the young age of eight, he was an active and committed member of Young Judaea and spent 10 summers at Young Judaea camps. Known for his intelligence and erudition, he graduated with honors from Hewlett High School, where he excelled and exhausted every advanced placement course offering. He served as National Mazkir (President) of Young Judaea during his senior year, and deferred his first year at NYU, to participate in Young Judaea’s year course in Israel. Harris only wanted to attend New York University, where he applied early decision, despite advice from his guidance counselor and mother, who urged him to apply to more than one school. So typical. As with everything in life, he did it on his own terms and his confidence was rewarded; ultimately, he was accepted with an academic scholarship. Always the creative and independent thinker, the Gallatin School of Individualized Study became his intellectual home. Upon graduating from college, Harris remained in the city he loved, New York, where he found his first job as a paralegal at Piper Rudnik. There he created, along with his boss, the company's first digital law room which is still in use today (he found out recently) and is referred to as “The Room that Harris Built.” A love of animals led him to complete a Post Bachelor’s certificate in the biological sciences at Hunter College. He then landed a job as Office Manager and Project Associate at The Evan Donaldson Adoption Institute, a national adoption research organization. His expansion in technology at this non profit led him to spend the next seven years at Google. His favorite part of the job involved planning Google’s annual holiday party in New York. He also very much enjoyed hosting a Dedicated Google talk event with the band Wilson Phillips (check it out here!) https://talksat.withgoogle.com/talk/dedicated Harris realized his dream of moving to the West Village in 2007. He loved his home on Christopher Street, and frequented the Hudson River Dog Run several times a day with his dog, first Shep and then Mona. Harris loved music and loved to dance. He followed his favorite band, Phish, around the country countless times, whenever work permitted. He was fond of dancing to their music on the porch in the Berkshires or anywhere, really, if the mood moved him. Harris also loved to cook, and could often be found in the kitchens in both NYC and the Berkshires, hosting guests alongside his mother, offering cocktails, appetizers, food, laughs, and making sure everyone felt at home. We’ll think of and miss the free spirited, eclectic person who paved his own path everyday. As he wrote to his nephew on his birth, we now hold the same message for you, Harris: “Baby boy, you're on my mind, I see you in my dreams.” A memorial fund has been created in Harris Kaplansky's memory at the Young Judean Camp, Tel Yehudah, a Zionist camp for Jewish teens. In lieu of flowers, donations may be made in his honor by scrolling to the top of the page above the narrative and selecting donations.