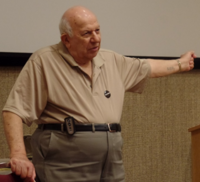 Leo was born on May 23rd, 1927 in Andrychów, Poland to Ida (Goldfinger) and Moritz Mittler. Leo had two older siblings, Otto and Felix. Leo’s father owned a tannery where skins were processed to manufacture leather shoes. When Germany invaded Poland on September 1st, 1939, Leo was 12 years old. His life would change forever. While trying to escape, Leo’s family was separated. Leo’s father and brother Felix were captured by the Germans and placed in a Concentration Camp near Lvov, while Otto was captured by the Russians and put in a labor camp in Russia. Leo and his mother Ida remained in their home in Andrychów. A few months later they were relocated to the Ghetto, where Ida carried out kitchen duties. Leo was taken outside the Ghetto to perform force labor tasks, then transferred to the Concentration Camps. Ida received a letter from Moritz stating that his skills were being used by the Germans. He had been tanning leather shoes for the soldiers, and thus was privileged with a bit of extra food. Their son Felix had been killed by the Germans after he was forced to dig his own grave. Their second son Otto was in Russian custody. In 1943, when the Andrychów Ghetto was liquidated, Ida was sent to Auschwitz where she was gassed upon arrival. Leo endured 7 brutal Concentration Camps. His name was 35230, the number tattooed twice, on the front and back of his left arm. Leo often contemplated escape, but witnessing the public hanging of those caught, changed his mind. Upon transfer to what was to be his final camp, Leo was recognized by an uncle who achieved the Kapo position (a prisoner assigned by the SS guards to supervise forced labor and carry administrative tasks), therefore allotted double rations of food. His uncle managed to arrange double rations for Leo too, a fact that saved Leo’s life. Leo’s camp was liberated by the Russian army on February 10th, 1945. His uncle died three days later of typhus. After liberation Leo returned to his hometown in Poland, only to learn that his family was murdered. He migrated to the United States and landed in New York. Leo enlisted in the US army and served in Korea during the Korean War. Upon return he met Florence. They were married for 61 years. Leo and Florence have three children and one grandchild. Leo was very active at the Tolerance Education Center and shared his story with thousands of students. On Friday, April 24th, 2015, Leo was honored by Assemblyman Chad Mayes at the Tolerance Education Center. In lieu of flowers, the family prefers donations to be made to: ~ Tolerance Education Center https://www.toleranceeducationcenter.org/ Tolerance Education Center in Rancho Mirage, Ca The Tolerance Education Center will tailor the visit to the subject matter of your lesson plan. READ MORE > Support Our work. READ MORE > Read More > Student programs and activities provide an educational opportunity to reduce prejudice, teach critical thinking, and create a more humane society. ... www.toleranceeducationcenter.org and/ or ~ Homeless Veterans’ Programs https://www.va.gov/homeless/index.asp Homeless Veterans - VA.gov | Veterans Affairs Discover the steps you can take to make a difference in the lives of those who served our country. You’ll also hear from formerly homeless Veterans about their positive experiences with VA as they exited homelessness. Learn more about formerly homeless Veterans and their experiences by navigating to the Video page. www.va.gov To view Leo’s story please click on the link below. https://www.youtube.com/watch?v=ftMq78wMQog#action=share Thank you, Talia Lizemer-Hawley, M.A. Curator, Education Director Tolerance Education Center 35-147 Landy Lane, Rancho Mirage, CA. 92270 (760) 328-8252