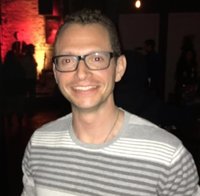 Robert was born in Toronto, Canada in 1983. He is survived by parents Arlene and Mike, sister Jen, brother in law AJ and nephew Eli. Rob grew up with a large, extended loving family and was very close to his Toronto roots. As a youngster, he was a curly topped, funny, verbal little boy. Up until age 3, he and his family lived with his grandparents (Fay and David Cohen) and forged close bonds with his many cousins, aunts and uncles. Having moved often, he was very adaptable to his new environment, school and friends. He was raised in a traditional Jewish home and went to Jewish schools and summer camps. He graduated with a BA from George Washington University and then went on to earn his MD from Sackler School of Medicine. He worked tirelessly in the field of neuro-psychiatry for the majority of his career. Recently, he returned to graduate school and earned his Masters in Public Health from Columbia University. Rob loved to work out, scuba dive, watch edgy movies, listen to podcasts, hike and enjoyed the warmth of the sun on his face. He was an avid reader, abstract thinker and quite philosophical. Science and medicine were his passion. He practiced meditation, mindfulness and was always searching for serenity and peace. He was soft spoken, humble and authentic. He never lost his temper or showed anger towards anyone. He was always respectful and carried himself with dignity. Rob would never state that he was “spiritual” yet clearly, he was. In spite of his extraordinary accomplishments, he saw himself merely as a simple man. He wanted for nothing yet was a minimalist. Possessions were meaningless. Relationships with family and friends were everything. A brilliant mind and complex thinker was Rob; this was a blessing and a challenge for him. In spite of this, he persevered, always sought recovery and wellness and helped others with similar challenges in his free time. This was his true passion. Rob was such a funny guy, with a witty sense of humor. Platitudes and social graces may not have been his forte and small talk was of no import. You would not find him on social media. Instead, he preferred to engage with those who really ‘saw’ him. Rob will be missed terribly. While Robert’s lifespan on this earth was short, his essence and impact upon others is of one who lived to 120. Contributions in Rob's memory may be made to https://www.columbiapsychiatry.org/give-volunteer/donate-frontier-fund