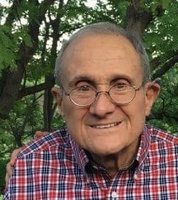 Donald E. Spiegleman, born May 24, 1935 in Denver, Colorado, passed on April 16, 2020. Donald, a beloved father, grandfather and friend, began his legal career as a Denver District Attorney. He served as the City’s lead prosecutor in the early 1960’s before moving on to become a real estate lawyer. Over his career, “Spieg” worked with some of the biggest real estate developers in the nation and was involved in many high-profile transactions including the purchases and sales of the Beverly Hills Hotel, the Pebble Beach Resorts and Aspen Skiing Company. The Denver Post deemed him the “Dean of Downtown” as he was instrumental in shaping the skyline of downtown Denver through his work. Don’s greatest pride, however, came from his children, both of whom followed him into the law, and especially his grandchildren. Donnie is preceded in death by his wife Rose, and his sister, Jane Gidwitz. He is survived by his children John (Jill) Spiegleman and Julie (Mike Shomo) Spiegleman, by his grandchildren, Sam and Sophia Spiegleman and Taite, Devon and Quinn Shomo, and by his sister Nancy (Michael) Schulson. A private graveside service will be held Monday, 1:45pm. A live stream of the funeral will be available on the platform: Periscope. If you wish to stream the funeral service, from a computer internet browser type: www.pscp.tv and then in the upper left hand corner of the Periscope website will be a search bar where you can type: Donald Spiegleman Memorial Service. The stream will be available approximately 10 minutes before service time. In order to set proper expectations, there often is connection problems in Emanuel Cemetery. If you do NOT find the stream, that must mean there was not connectivity in the cemetery. Thus, the service will be recorded in an audio format and made available on another medium and at another time. In lieu of flowers please consider donations to St. Jude Children’s Research Hospital (www.stjude.org) or the Listen Foundation (www.listenfoundation.org).