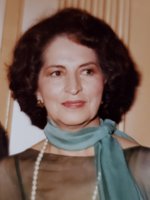 Genevieve (“Gen”) Faingold was born on March 20, 1924, and raised in Fort Collins, Colorado. Gen met her husband, Bernie Faingold, in Cheyenne, Wyoming, where they married in 1952. Gen enjoyed working with Bernie throughout their marriage in their business, Faingold Studios, a prominent portrait studio. With their young family, the Faingolds moved their business to Denver in 1961. A skilled artist, Gen used her artistic abilities to retouch Bernie’s portraits long before the invention of Photoshop. Gen, who never met a stranger and genuinely enjoyed learning people’s stories, possessed an impressive ability to procure notable clientele. Together, Gen and Bernie photographed numerous dignitaries and celebrities, including Dr. Martin Luther King Jr., Presidents Lyndon Johnson and Harry Truman, Senator Ted Kennedy, Supreme Court Justice Byron White, Nelson Rockefeller, Dick Van Dyke, Maurice Chevalier, and Liberace, to name a few. Gen was an entrepreneurial, strong-willed woman known for acting of her own volition; she taught her family self-reliance and inspired them to think for themselves, all while providing selfless support. Gen was a patron of the arts, enjoyed high fashion and design, jazz, and her flower garden. She passed time creating works of art which her family is fortunate to have on display in their homes. Gen was proud of her Spanish heritage, loved speaking Spanish and learning about foreign language and culture through her travels. Her most proud achievement was the family she created with Bernie, whom she loved unreservedly; their home in Hilltop was family headquarters. Her happiest moments were when she was surrounded by her children, grandchildren and great-grandchildren, all of whom adored her as much as she did them. Gen was preceded in death by her husband Bernie https://www.denverpost.com/2006/07/16/photographer-captured-some-of-nations-greats/; and is survived by her four children: Fidelia (Stuart) Kirk of Santa Fe, New Mexico; David Faingold of Denver, Colorado; Cindy (Greg) Phillips of Moument, Colorado; and Carole (Hans) Naeff of Greenwood Village, Colorado; eight grandchildren: Lyndsey (Monte) Richard, Sally Gordon, Sarah (Bryce) Reeves, Ali (Rylan) Miller, Ben Faingold, Ryan Phillips, Emily Faingold, and Marc Gordon; and great-grandchildren, Goldie Richard and Zev Richard. Gen was 96 years old. Donations in Gen’s memory can be made to the Alzheimers Association Text for obituaries and email blasts: A private graveside will be Friday, 11:45am A public livestream of the funeral will be available on the platform called: Periscope If you wish to view the funeral: (10 minutes before service time) 1. From a desktop computer or any internet browser, go to Periscope or www.pscp.tv a. In the upper left-hand corner of the webpage, there is a search bar where you will type: Genevieve Faingold Memorial Service 2. From a mobile device, you can either use an internet browser or you can download an app for Apple iOS or Android To set proper expectations: Connectivity is often limited in cemeteries. If you are not able to search and find the livestream, that means the connection was not established and the livestream is NOT available. We will have an audio recording of the funeral service available at a later date.