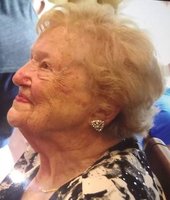 Born Jeanette Forman “on the kitchen table” in Brooklyn, New York, Jean was the daughter of Russian immigrants Sam and Anna Forman. Jean was a New Yorker, through and through. She loved life. She loved her two sons, Andy and Steve (Shmuel), her daughter-in-law Janet Sherman, and her two favorite grandchildren, Nitai and Galit. Jean graduated from James Madison High School in Brooklyn and afterwards went on to help the war effort. She married Arthur Deitel in 1948 and lived in Queens, New York. They later bought a home in Westbury, Long Island where they raised their two boys. Jean worked in the Theater Department at Nassau Community College for many years, enjoying the young, dramatic energy of the late 1960s. She always said she learned a lot from that experience. [So did the boys!] Jean and Arthur moved to Cranbury, New Jersey where she enjoyed her retirement. She learned to play golf and began her long career playing bridge. After Arthur’s death in 1996, and when her children and grandchildren moved to Denver, Jean followed them to begin a new chapter. She enjoyed her condo at Candlewyck, made good friends, played a lot of bridge, joined the National Council of Jewish Women, Hadassah, Congregation B’nai Havurah, and was thrilled to be part of her family’s everyday lives. “Grandma Jean” was famous for her date-nut bars, her pot roast, and her chopped liver. Jean later moved to Brookdale Tamarac, where she participated in the Jewish group, the book club, and again, played a lot of bridge. There she celebrated her 90th birthday with many family and friends. Most recently, needing a higher level of care, Jean moved to The Carillon at Belleview Station. There she celebrated her gala 95th birthday with family and friends. Always the voracious reader, Jean kept up with her weekly New York Times, the New Yorker and Vanity Fair, finding kindred souls to share her love of good food, fashion, current events, and New York in general. Jean will be missed by all the numerous friends, family and acquaintances whose lives she touched with her graciousness, generosity of spirit, sincere interest in people, and kind words. Jean was an enthusiastic supporter of various liberal causes from Native American to civil society groups, rooted in her Jewish identity and values of tzedekah. Memorial contributions may be made to Jewish Family Service of Colorado or a charity of your choice. Zichronah livracha, may the memory of Jean Deitel be for a blessing.