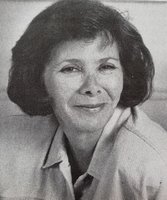 Jacqueline Elise Shere Lewin was born in Denver on July 27, 1934 to Donald Shere and Martha Reich Shere. The only child and grandchild on both sides of her family for nine happy years, she grew up pampered and beloved, giving her a base of confidence she drew on throughout her life. She received a full scholarship to Goucher College, where she earned a BA in English. She married Edward Lewin, also of Denver, in 1954, and they had two children, Cynthia and John. After living in Baltimore, Boston, California, and Texas with her husband for a decade while he finished his medical training and served in the military, Jackie and Ed moved home to Denver. She worked as producer of the Bill Barker television and radio show at KOA, and co-authored a book, Denver!, with Barker. As a freelance writer, she published many articles in national and regional magazines, including Skiing and Tennis magazines despite her innate loathing for physical activity. A risk taker all her life, she invested in real estate and started her own business as a media escort (the subject of many jokes from her friends that she was running an escort service), accompanying authors in Denver for book tours, including Mary Higgins Clark, Judy Collins, Ken Follett, Al Gore, Sue Grafton, Gloria Steinem, and over a hundred more. She then wrote a mystery series of her own set in the world of general aviation, using the insights she gained from flying around Colorado and the Great Plains with Ed in his four-seater plane. Jackie filled her life with passions, including bridge club with her friends for more than 50 years, piano and cello, travel, entertaining, and more. Her holiday parties were legendary. She loved concerts in City Park, gambling at the track, and Elitch Gardens and Lakewood amusement parks. She was a true intellectual, regular reader of the New Yorker, discerning consumer of the best literary fiction and a one-time book reviewer for the Boston Globe, but also a fan of both trashy and classic mysteries. She taught classes on fiction, including one on Scandinavian mysteries and another on spy novels. She served on the board of directors of the Denver Public Library Friends Foundation and as President of the Colorado Authors League. She was also a long-time reader for Recording for the Blind. Decisive, impetuous, adventurous, creative, opinionated, and witty, she was great company and had a lifetime of friends to show for it. Jackie was an exceptional grandmother, deeply involved in her grandchildren’s lives, from throwing special birthday parties to arranging music lessons and practicing with them. A tiger mother ahead of her time, she was (too) quick to point out that her two children had become a Yale-educated lawyer and a Harvard-educated doctor. Jackie is survived by her children, Cynthia Lewin of Arlington, Virginia, and John Lewin of Denver, Colorado; their spouses, Arthur Fox and Rebecca Lewin; and four grandchildren, Mira, Monica, James, and Robert, as well as a world of friends and deep-rooted community. Her husband of 65 years, Ed, died in April; they were able to realize their oft-expressed wish not to live too long without each other. Contributions may be made to the Denver Public Library Friends Foundation, Food Bank of the Rockies, or a charity of choice. Private graveside service.