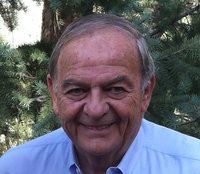 Michael Charles Abrahm “Mike” of Littleton, Colorado, passed away on May 16, 2020 after a long illness. Married to Harriet (Gordon) for over 58 years, Mike was born in New Orleans, LA in 1941, and he earned his undergraduate and law degrees from Tulane University. Following law school, he served in the US Army’s Judge Advocate General Corps “JAG” at Ft. Eustice, Ft. Carson and Rocky Mountain Arsenal. Honorably discharged after four years as a Captain, he opened his law practice in Colorado Springs. He was appointed to a municipal judgeship, raised two sons, enjoyed his membership at the El Paso Club and served on various non-profit boards during his stay in Colorado. In 1981, the Abrahms moved to Dallas where Mike worked in the oil and gas industry until he launched an environmental remediation consultancy in 1988. This took Harriet and Mike to Tampa for twelve years where they made great friends, enjoyed the beach, and welcomed their grand kids. Missing the Rocky Mountains, Mike opened a second office in Evergreen, Colorado and continued to run his company for over twenty years. In 2006, immediately after Katrina hit his home state of Louisiana, Mike was engaged as an expert for environmental restoration for the state, until he retired in 2018. Mike was an avid reader, who enjoyed history and historical fiction. He loved travel and just being Grandpa Mike. He is survived by his wife Harriet, two sons and his daughters-in-law Mark and Amanda Abrahm, Brent and Wende Abrahm, five grandchildren, Zoë, Addison, Owen, Kyle and Peri, and his two sisters Clare Benjamin and Sabina Altman. A celebration of his life will be held at a later date. In lieu of flowers, contributions are requested to one’s charity of choice.