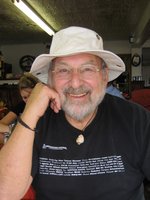 Bernard Reder, loving husband, father, grandfather, brother, and uncle, died at the age of 85, on April 27, 2021, on the beach while on vacation with his wife, Elizabeth. Bernard was born in Manhattan, New York, the eldest of 3 children, and grew up in Queens. His early work was in advertising in New York City, and he later established an independent studio. His successful career in graphic design brought him to Colorado in 1972. For his second act, he was a "house-husband," driving carpools and chaperoning field trips for his youngest daughter. In his 60s he volunteered on army bases in Israel, and served food to those who were displaced from hurricane Katrina. He lived life to the fullest and loved riding motorcycles, swimming in the ocean, spending time with friends and family, traveling, adventures, movies, and food. He was also an accomplished metal sculptor whose "hubcap sunbursts" became famous within his and his children's circle of friends. Bernard’s generous, warm, gregarious, kind spirit and love of life was evident amongst his large circle of friends and in the way he touched many lives. He is survived by his wife, Elizabeth; his children, Michael, Wendy and Lindsay; grandchildren, Noah and Lucy; his sister, Carole; and seven nieces and nephews. Donations in Bernard’s honor can be made to B’nai Havurah or the charity of your choice. Livestream available on Feldman Mortuary YouTube Channel. Shiva information. Tuesday and Wednesday from 3:00pm-6:00pm. Please call Elizabeth at 720-209-5461 or Lindsay at 424-272-7067 to schedule a time as space is limited.