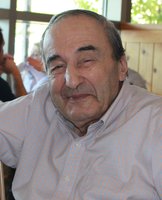 Marvin Friedman, 92, passed quietly Sunday morning at Shalom Park Nursing Home. Known for his ready smile, handsomeness, and shy demeanor, he led a long life surrounded by a large loving family in Kansas City and then in Denver. His life in Denver was marked by his nearly 30 years of happy marriage to Godeanne, the love of his life. Marvin was the proprietor of nursery and landscaping companies in Kansas City (Green Thumb) and Denver (Marvin’s Gardens).

He was born to Ben and Rebecca Rafiel Friedman in 1928 following a difficult childbirth, during which his mother died. He was then raised by his aunts before his dad was remarried to Frieda Piltz. He grew up in Kansas City with 2 older brothers, Bob and Isadore Friedman, and, eventually, two younger sisters, Jackie Frazin and Myra Rieger, and a younger brother, Ted Friedman. Born with a neurological disability that embarrassed him and hampered his further education, despite his intelligence and sharp command of English, he stopped schooling after graduating from Southwest High School and set off on his own in the landscaping business. He started Green Thumb Landscaping, originally including a retail location on Troost Avenue, where he began his years of selling Christmas trees. He met and married Rita Seavey in 1958 and adopted her son, David. Together they had a second son, Alan, in 1959. The young family traveled together, visiting family in Florida, Colorado and Maine and a memorable trip to Washington, DC. Marvin worked hard at his business, and it grew and evolved entirely into landscaping services (he was entirely self-taught as a designer). Proud of his sons, he helped them grow up, including giving them parts of the business to run. Marvin and Rita grew apart though and divorced in 1982. Marvin then moved to Denver where a large part of Friedman clan had settled.

In Denver Marvin met and married Godeanne Garel and became stepfather to her three grown sons, Jim, Scott and Cliff Garel and eventually stepgrandfather to Jill and Ali. They lived a quiet and happy life together, socializing with friends and family. In their later years, they became proud grandparents of Sebastian, the son of Alan and his wife Gosia. Marvin saved perhaps his biggest smiles for Sebastian. Forced from their home by an unfortunate event, Marvin and Godeanne entered first assisted living and then Shalom Park, where Godeanne died shortly after admission. Continuing his ready smile, twinkling eyes and shy demeanor, even as he aged and dementia set in, Marvin became a widely loved fixture around Shalom Park after Godeanne’s death.

The family would like to thank all the caregivers at Shalom Park who took care of Marvin for many years, especially Barbara, Adam, and also Marvin’s friend at the Bistro, Asher. In lieu of flowers, the family requests that donations be sent to Shalom Park.

Funeral Service, 12:45PM, Wednesday, July 28 at Emanuel Cemetery. A public livestream will be available on Feldman Mortuary's YouTube Channel by clicking here at the time of the service- Feldman Mortuary - YouTube