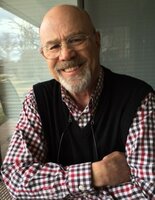 Norman, 78, passed away peacefully on 8/28/2021.  He had been diagnosed with Primary Progressive Aphasia, a rare form of dementia, at the age of 70, and had been lovingly cared for at Juniper Village of Aurora for the last three years.

Born in New York to Hilde Breslau and Herman (Sieradzki) Sheldon, the family, including his sister Vivian, moved to Denver in 1955.

Norman graduated from East High School and attended Colorado State University.  While his primary career focused on real estate and land development, he was also involved in community service.  He served many of the neighborhoods that he lived in by volunteering on their HOA boards.  He was a board member on the Aurora Chamber of Commerce, an Honorary Colonel at Lowry Air Force Base, and a Police Officer and Firearms Instructor for the Aurora Police Department.  His real passion was for the Parker Jordan Metropolitan District.  Norm spent 30 years serving this organization, twenty-four years as their President.  Among his achievements, he built school playgrounds, bridges and roads.  His crowning jewel was the 107-acre Parker-Jordan Centennial Open Space.

He was an avid outdoorsman and enjoyed teaching his three children everything he knew.  He loved constructing, deconstructing, and playing in his workshop.  He and Brenda travelled to 35 countries, taking countless photos, and then boring their friends with slide shows.  Enjoying an early retirement, he and Brenda bought a home in Phoenix where they spent eighteen wonderful winters.

Funeral services will be held at Temple Sinai, 3509 S. Glencoe Street, on Tuesday, August 31st at 10:00 am. A public livestream will be available on Temple Sinai’s website by clicking here at the time of the service- Live Streaming - Temple Sinai (sinaidenver.org)