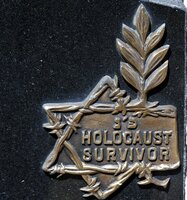 sixty-plus year career, including discovery of the Prinos field in Greece and the

Kashagan Field in Kazakhstan, one of the largest finds ever in that region.

A Holocaust survivor, Jack was born in 1932 in Brest, Poland (now Belarus) the

youngest of three boys. He was seven when Germany invaded Poland, forcing his

family to flee to Ukraine. He and his parents, Fania and Solomon Grynberg, made their

way back to Brest during the war where they spent a short time in the Brest Ghetto.

farming village where they hid in a barn for nearly two years. They spent the final

months of the war living in nearby forests with a group of partisans.

Following the war, Jack and his parents lived in the Deggendorf Displaced Persons

camp. They eventually made their way to Palestine through Scotland. Jack joined the

Irgun and fought in the Israeli War of independence. Menachem Begin, the leader of

the Irgun was Jack’s lifelong hero. Begin, also from Brest, was a friend of the Grynberg

family and babysat Jack when he was a child. Jack had a lifelong love for the State of

In 1949, Jack Grynberg arrived in Denver, Colorado with $27 in his pocket. He was

Mines. He graduated from the Engineering School in two and a half years with

degrees in Petroleum and Geophysical Engineering. He later received a Master’s in

Petroleum Engineering and Refining. Jack then served in the United States Army

his career as an independent oil and gas developer. Over six decades, Jack was a

pioneer in the use of seismic data for oil exploration and an expert in well log analysis.

He confounded the industry with his independence and his legal challenges. He

the Caribbean as well as in Colorado, Wyoming, and North Dakota. He was a former

achievement. He believed strongly in and gave generously to the State of Israel, The

University of Colorado Anschutz Medical Center, the Colorado School of Mines, The

Jewish National Fund, AIPAC, and numerous other Jewish organizations and

travel, consume milkshakes and chocolate and spend time with his grandchildren.

Mr. Grynberg is survived by his former wife, Celeste Grynberg, his three children

Rachel (Rick), Stephen (Susan), and Miriam, and his four grandchildren, Stella and

The service will be livestreamed on the HEA YouTube Channel at

Contributions can be made to: Serving our Survivors – Holocaust Assistance Program

“Amigour” in the drop-down menu).