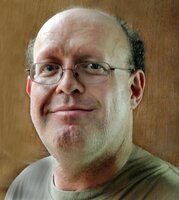 He was born in Pueblo, Colorado March 24, 1959 to William and Elsa Klaiman, Polish survivors of the Holocaust.  Danny attended Pueblo South High School (Class of 1977), where he was a member of the forensics team, competing in Lincoln-Douglas debate and extemporaneous speaking. Later, he judged local high school speech meets.

In 1981, he received a Bachelor’s Degree in Mass Communications from the University of Southern Colorado. As a student at the University, Danny broadcast as a DJ on the college radio station.

Starting in Pueblo and later in the Denver Metro area, Danny became a grocery clerk with King Soopers. His career of 36 years included service as a Steward and Bargaining Unit Member of The United Food and Commercial Workers Local 7.

Danny loved listening to music, playing video games, and exploring the internet.  He particularly liked stand-up comedy and had an immense knowledge of comedians dating from the birth of television to modern day. An outing to a comedy club was a special treat. Personally, Danny was an encyclopedia of corny jokes.