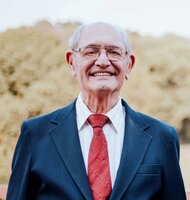 He married the love of his life, Miriam Weitzman Bernstein, on June 19, 1955 in Buffalo, New York. They were married for 67 years.

He passed November 10, 2022 at MorningStar Senior Living of Parker, Colorado.

He is predeceased by his mother, Hannah Sultz Bernstein, his father Morris Bernstein; his brother Robert Benson and sisters Jean Buick and Lillian Berman.

His passion was being a musician, which he could do part time. He wrote arrangements, and played piano, organ and trumpet under the name Ben Bernie.

He belonged to Lockport Musicians Union.

He liked bowling, swimming, and dancing. He was passionate about his music and his family was everything to him. Everywhere he went, his joyous presence was felt with his beaming smile and optimistic warm spirit.

The chapel service will be streamed via Feldman Mortuary's YouTube channel.