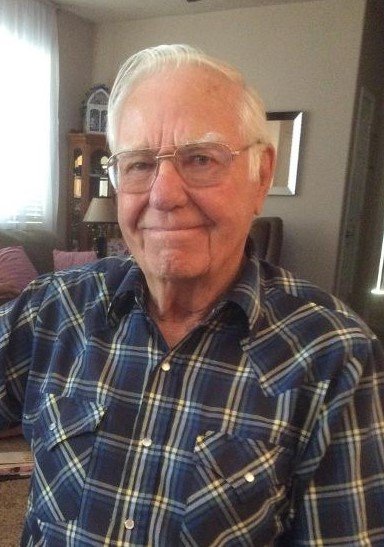 Graveside service will take place on Tuesday, September 22nd at 9:30AM. Service can be viewed at Feldman Mortuary's YouTube channel: https://www.youtube.com/channel/UC7CQNliXtxRvoOGVZvmH-kg

Memorial service will take place following the burial on Tuesday, September 22nd, and will be available at Feldman Mortuary's YouTube channel: https://www.youtube.com/channel/UC7CQNliXtxRvoOGVZvmH-kg

William “Bill” Leslie Munkres, Jr was born September 10, 1926 to Louise Henrietta Castrop Peasick and William Leslie Munkres Sr. Bill passed away at home on September 11, 2020 at the age of 94 surrounded by his children.  He was born in Cripple Creek, CO on a family ranch where they lived until after the Great Depression. The family moved to Littleton, CO where Bill attended high school and worked at Fort Logan.  He joined the Navy at 17 and spent time on the destroyer USS Topeka in the Pacific during World War II.  He went to Colorado State (A&M) University upon leaving the Navy and received a degree in Forestry while marrying his wife, Joyce Reid.  He also attended Denver University.  Bill began staking uranium claims in Wyoming and the Dakotas and then started his own mining company.  He then moved to Lakewood, CO and worked for Jefferson County as Road and Bridge Superintendent.  Later, he moved the family south of Steamboat Springs, CO and started his own civil construction company to build the Stagecoach ski area.  He then moved the family to warmer Delta, CO. From Delta he continued his business building roads and reservoirs mostly in southwestern Colorado.  After his retirement in his 60’s he enjoyed time in Hurricane, UT until he returned to Littleton in 2002 to become the primary caregiver for his Mother Louise for six years before her death in 2008.  He was an avid risk-taker and adventurer who loved flying as a pilot, snowmobiling, hunting, gambling, and watching the Colorado Rockies and Broncos.  His strength, hard-work, service to others, and courage were his calling card.  His life was full of hair-raising adventures and larger than life experiences. Bill will be decorously interred at Fort Logan as he wished. He is survived by his sister Clara Hoppal, his son, Monte Munkres (Anita) and daughters Tina Elenberger (Scott) and Mary Leeds, his grandchildren, Olivia Gabrielle Wear (Isaac), Xanna Padilla (Michelle), Tyler Elenberger, Tamara Elenberger, Kristina Leeds, and Jessica Leeds and numerous nieces and nephews.  He will be forever in our hearts and in our memories.

Graveside service will take place on Tuesday, September 22nd at 9:30AM, via Feldman Mortuary's YouTube channel at: https://www.youtube.com/channel/UC7CQNliXtxRvoOGVZvmH-kg

Memorial service will take place following the graveside service on Tuesday, September 22nd and can be viewed at Feldman Mortuary's YouTube channel: https://www.youtube.com/channel/UC7CQNliXtxRvoOGVZvmH-kg

Share Your Memory of
Bill
Upload Your Memory View All Memories
Be the first to upload a memory!