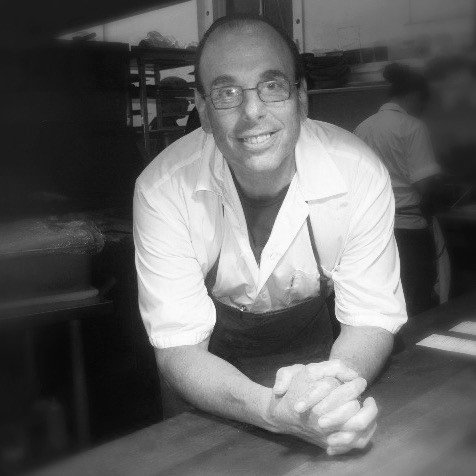 James Edward Cohen, 65, a renowned chef/restaurateur who survived a devastating stroke and recovered to walk his daughter down the aisle less than a year later, died on Thursday, October 22, 2020, in Denver, CO.

Jim was born on July 30, 1955 in Buffalo, N.Y., to Henry Cohen and Beverly (Bregger) Cohen. He once described himself in a newspaper profile as a “perfectionist, oddly charming, charismatic, loyal, competitive and funny in a sarcastic way.” He could have added “self-aware,” because that about summed him up. Jim developed an early interest in food–specifically, eating it. He was, in the nomenclature of the times, a “husky” kid who as a teenager would mooch two dinners from friends many nights and still be home for a third.

Jim attended the Vershire School in Vermont and studied photography at the University of Buffalo. To pay for darkroom equipment, he worked in restaurants. His first job, flipping burgers at Burger King, didn’t last long: he was fired. He then got a job at a real restaurant, starting as a dishwasher and moving up to sauté chef. The French-born chef he worked for “was grumpy and he'd yell and scream, but we did pretty good food,” Jim once said, traits he would hone to perfection in his own career.

He enrolled at the Culinary Institute of America in Hyde Park, N.Y., where he met his future wife, Connie. They then moved to Colorado. Jim led a typically peripatetic chef’s life: he worked at the Denver Country Club; opened Plum Tree Cafe and then ran the kitchen at Tante Louise, both in Denver; served as executive chef at the Wildflower in Vail; became executive chef at the Phoenician Resort in Phoenix; ran The Park Lane in Buffalo; was Executive Chef at Terrazza Restaurant, Caesars Palace in Las Vegas; and finally created Boulder county's beloved Empire Lounge and Restaurant and Pizzeria da Lupo. He also consulted and worked with some of the great chefs of the past 40 years, including Jean-Georges Vongerichten, Paul Bertolli and Jonathan Waxman.

While at Tante Luise, Jim was noticed by Julia Child, who named him one of the top 11 chefs in the country in 1983 and invited him to appear on her television show, Dining With Julia. The two stayed friends¬. "She'd come to Denver and we'd have long conversations about what American cuisine was and how to translate that at Tante Louise. I appreciated her intelligence," he said. In 1991, the James Beard Foundation nominated Jim for Best Chef in the Southwest.

In 2015, while in Telluride for the annual film festival, Jim suffered a massive stroke that, by all accounts, should have been fatal. He was left “locked in”: fully conscious and alert, but unable to move any part of his body except his eyelids, to blink. While in the ICU, and unsure if he would survive, his soon-to-be son-in-law, Andy Scott, asked for his permission to marry his daughter Lexi. Jim gave an enthusiastic blink.

Then, bucking the odds, he started to recover, and within weeks was able to express his thoughts using an alphabet chart held up by a physician. He vowed then that he would walk Lexi down the aisle. Mere survival was still in question; walking was unthinkable. Yet, channeling the competitive perfectionist in him, along with his belief that “Life Is Attitude”–a slogan printed on T-shirts his friends and family faithfully wore–he was indeed able, using crutches, to walk across a mountain field and deliver Lexi to Andy on their wedding day in Boulder. Yes, everyone cried and applauded. His story was so profound, UCHealth and the University of Colorado Medical Center, where he was treated, created a video https://youtu.be/FGi3hjG2GsM and published an article https://www.uchealth.org/toda… on his case, and used him and his recovery in advertising and marketing campaigns.

Jim continued to progress, and though he mostly used a wheelchair he was able to return to help Lexi run his restaurants and consult with other chefs. He rode a recumbent bike around Denver and had just bought a Peloton before his sudden death. He had the outrageous dream of riding a bicycle from Denver to Buffalo—outrageous to everyone except Jim.

Most important, his remarkable recovery allowed him to meet his two grandchildren, Evvy and Liam, who brought him his greatest joy. Along with his family and extensive group of friends, he also got great joy from the Denver Nuggets, and considered watching a game in courtside seats with his dear friend Dr. Ben Honigman one of the best days of his life.

To honor Jim, the family requests you support the Independent Restaurant Coalition https://secure.everyaction.co… or the Food Bank of the Rockies http://fbr.convio.net/goto/Ji… .