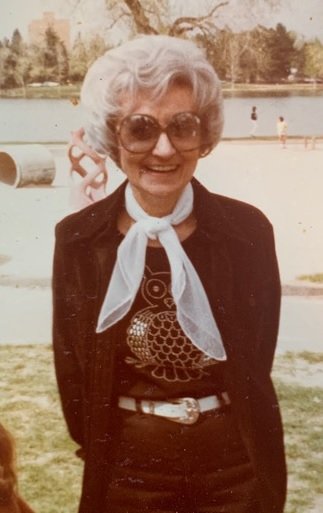 Betty Mendelson, 98, Denver.   Elizabeth Sonya Shapiro was born and raised in Joplin, MO where her parents, David and Ida (Zeitlin) owned a shoe store.  She recalled that their house was the only one on her block that did not have a “NO BEGGARS” sign in the window.  Her mother would generously make a sandwich and give a coin to anyone who came to their door in need.   Betty, in turn, was known for her generosity and care for others less fortunate.

She was voted smartest girl in her high school graduating class at Joplin High School in 1940. She received a cash prize from the Daughters of the American Revolution (DAR) for being the best history student in her high school.  Shortly after, the DAR refused to allow Marion Anderson, an African-American opera singer, to perform at their convention due to her being black.  Betty, therefore, declined the award as a statement against racism.  (Eleanor Roosevelt quickly and notably arranged a concert performance by Marion on the steps of the Lincoln Memorial)

After she graduated, 60,000 soldiers were stationed at Camp Crowder, near her small home town during WWII.  Betty met the late Leonard “Lenny” Mendelson;  the two fell in love and maintained a long-distance romance while he was deployed and wrote letters daily, which she kept neatly organized in a large box to this day.  When Lenny returned, they eloped and were married in 1946.  They later had a traditional Jewish wedding in New York.

The young couple moved to Brooklyn, NY where they had their first child,  Marilyn Dee Mendelson.  When New York felt too big for such a small town girl, the couple compromised and moved to Denver in 1951. Soon after Roberta “Bobbi” Faye Hogan was born.

Betty assisted Lenny in bookkeeping for his used car businesses, worked in administration at the American Cancer Society and Denver General Hospital, had a short stint with Century 21 as a realtor, and even did some runway fashion modeling in her 50’s.

Betty took the first public Hatha Yoga class offered in Denver in the 1960’s.  She was known for her good health and habits.  She liked to read, organize, thrift and collect.  She was a member of Temple Emanuel Sisterhood, studied Spanish, Yiddish and piano.  Betty and Lenny traveled for pleasure, their most notable trip was to Israel.

Betty had 2 grandchildren: Emelia (Kevin) Nidel & Govinda Hogan; she was great-grandmother of Kaiden Leo, 15, Lottie Sonya, 7,  and Shanti Sloane, 3. She is preceded in death by 8 siblings - 5 who lived and 3 who died as babies.

She was very close with her sisters, Estele, Jessie, Lillian and Rosalyn as well as their brother Samuel.  Betty is survived by many adoring nieces, nephews and greats of the Denver Bershof and Friedman families; Missouri Shapiro family and East Coast Mendelson, Goodman, and Nichamin families.  Betty was widowed in 1994 and lived independently for many years.

To say she was stylish is an understatement. Betty was effortlessly gorgeous and put-together, but what was most remarkable was her inner beauty, for which she was admired endlessly.  Her warmth, acceptance of diversity, open-mindedness, and ability to make people feel special within a short time were gifts still notable late in her life.

She was adored by all who encountered her loving presence, if even for a moment.

A private service will be held on Tuesday, July 13, 2021 at 12:00 PM (MST). It can be viewed publicly on Feldman Mortuary's YouTube Channel.

A public graveside will be held on Tuesday, July 13, 2021 at 1:45 PM (MST) at Emanuel Cemetery in Fairmount, followed by reception at the Candlewyck Clubhouse.  All are welcome to come and celebrate the life of this lovely woman.

In lieu of flowers, please make donations to the Southern Poverty Law Center or the ACLU, organizations that Betty generously supported throughout her life.