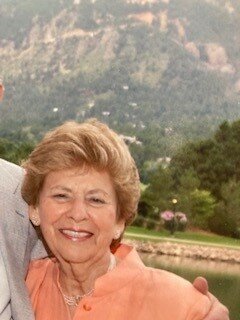 Sylvia Levenson née Ragir was the youngest of six children born to Alex and Sonia Ragir in Grand Rapids Michigan on December 15 1924.

She graduated from Union High School in 1942 where she was a proud member her senior year of their State Championship Debate Team. She attended the University of Michigan in Ann Arbor where she met her future husband David Levenson on the steps of Angell Hall. In the 40’s ballroom dancing was all the rage and both Sylvia and David were wonderful dancers so they hit it off right away. They were beautiful on the dance floor together.

They loved to travel - going to Europe on a grand tour in 1959 and later to China and to Israel in 1988 and several other times. In 2005 they both participated (at ages 81 and 83) in the March of the Living which celebrated the 60th anniversary of the liberation of the concentration and work camps of Bergen-Belsen and Auschwitz and Mauthausen in Poland.

Sylvia’s last “big” trip was a return to Israel 6 years ago when she was 90 years old.

David and Syl’s 66 years of marriage ended with David’s death in May of 2012. At which point, Sylvia decided to move to Denver where her two younger children and families were and try living on her own for the first time in 88 years. And she loved it! She took up residence at the Vi Senior Citizens Facility and made many friends participating happily in their many activities. Only in the last year did she have to slow down and accept that she really was 96 years old.

We will miss her presence greatly but she leaves us with memories of a life well lived. She was quite a gal.