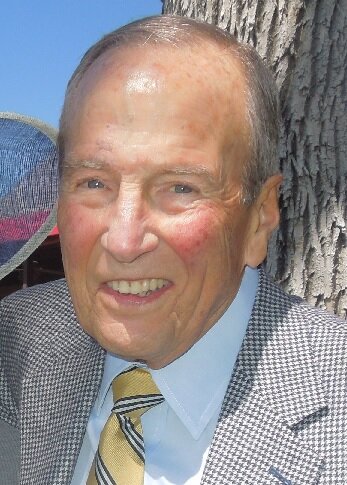 Alan passed away peacefully on December 20th at home surrounded by loving family at the age of 89. Alan was born in Hammond, Indiana in 1932 and graduated from Hammond High School.  He graduated from the University of Colorado in 1954 where he was captain of the swim team.  Alan was very proud to have served his country for 10 years in the United States Navy, two years of active duty as a flight control operator at Boca Chica Naval Air Station, plus eight years in the US Naval Air Reserve.  Alan married Katie Tweedle of Hammond, Indiana in 1962.  They moved to Denver that year.  They enjoyed 59 years of a very happy marriage.

Alan founded the A.F. Fox Realty and Investment Company, specializing in commercial real estate, in 1964.  He was a real estate broker and investor for 40 years.  Alan served as a Jefferson County Planning Commissioner for 19 years.  He was a member of Cherry Hills Country Club, The Cactus Club and Rotary.  Alan was a pilot, skier and fisherman.

In light of the dramatic spread of the new variant the family had decided to cancel the Shiva/open house.

Donations may be made in his memory to Metropolitan State University, Aviation Department, PO Box 173362, Denver, CO 80204.