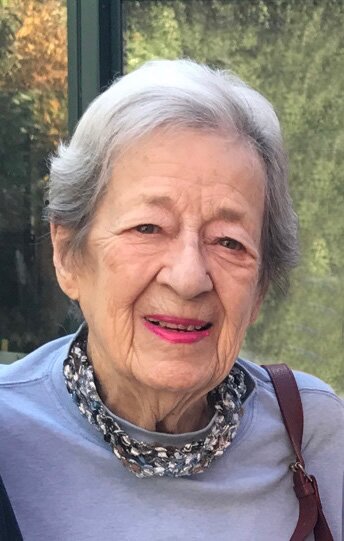 Born in Casper, Wyoming, Marjorie “Gloria” Talpers lived an idyllic childhood with her parents Herman and Bertha Talpers and her younger brother Stanley. She spoke often of learning to play the piano, which would become a lifelong passion. Gloria was a social butterfly and enjoyed a vibrant social life in Casper.

Gloria attended Mills College in California for one year before transferring to the University of Colorado at Boulder (CU). Gloria met her beloved husband, Martin (Marty) Trotsky at CU and their love story began. On December 19, 1944, Marty and Gloria were married at the Hebrew Educational Alliance Synagogue on the West Side of Denver and began their Colorado family.

Marty and Gloria raised their young family in Denver - Marty was an entrepreneur, and Gloria would substitute regularly in elementary school music classes across metro Denver. They both worked hard. Marty and Gloria became involved with Temple Emanuel and Green Gables Country Club and enjoyed becoming well connected in their community.

Marty and Gloria loved to travel globally and particularly to Hawaii and Scottsdale, Arizona. Gloria was an avid bridge and mahjongg player and enjoyed golf. She and Marty spent many years enjoying and meeting new friends who would bring so much joy to their lives. They were philanthropic and understood the importance of giving back to their community.

Gloria and Marty celebrated their 74th wedding anniversary with their family shortly before Marty’s death in 2019. Gloria celebrated her 100th birthday in September 2021, surrounded by her loved ones. Gloria cherished being a mother of two, grandmother of four and a great-grandmother of six. Gloria will be missed by her loved ones – who will cherish her wonderful “roasts” she would give at family events.

May her memory be for a blessing.

Service, Friday, 1/7, 1:45pm at Emanuel Cemetery. A livestream will be available on Feldman Mortuary’s YouTube Channel by clicking this link at the time of the service- Feldman Mortuary - YouTube

In lieu of flowers, donations may be made in Gloria Trotsky’s memory to the Martin and Gloria Trotsky Family Foundation at 10 Buell Mansion Parkway, Englewood, CO 80113 and to the University of Colorado at Boulder – Music School.