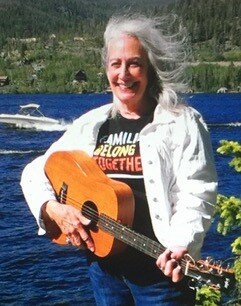 Marilyn Mendelson, of Denver, survived by daughter Emelia (Kevin) Nidel, grandchildren Kaiden Leo, 15, and Lottie Sonya, 8; sister and nephew, Roberta (aka Puja Dasi) and Govinda Hogan of CA; beloved cousins and countless friends from many walks of life. She is preceded in death by her parents, Lenny and Betty.

Marilyn was born in Brooklyn, New York on July 4, 1947. Her family moved to Denver and settled in Hilltop. She was confirmed at Temple Emanuel and loved the JCC Ranch where she was a camper, counselor, wrangler and song-leader. She graduated from George Washington High and Metro State University.

After taking accordion and Spanish as a child, she studied guitar and voice. She began to realize her dream of an on-stage career in Bonfils Theater productions.

While Marilyn dabbled as a hospital admissions clerk, pediatric boy’s counselor, legal secretary, singing telegram messenger (!) and preschool assistant, she always dreamed of being a teacher.

In her 20’s, Marilyn traveled as a professional folk musician and spent various times living communally with friends in the San Luis Valley. She joined a trio, Turquoise, which traveled and performed extensively. Ron Metzger was also in that band; the two went on and performed as a duo, fell in love, had a daughter and were married. After divorcing, they remained lifelong friends, and continued to connect through music for years to come.

Marilyn’s teaching career began as an ESL specialist at Bradley Elementary. She mentored children from multiple countries to learn English, often befriending their families. She was inspired to become a bilingual teacher and returned to college. Many trips to Mexico helped her attain fluency in Spanish; she dwelled in San Miguel De Allende in the mid-90’s.

Marilyn taught at several schools where students, and colleagues, were enamored with her unique integration of music in her classrooms; weaving environmental and social consciousness into lessons and, most importantly, for nurturing her students’ individuality with kindness and compassion.

In retirement, Marilyn enjoyed family time, devoting her final years to caring for her elderly mother. Friends and family fondly recall her story-telling, unconditional encouragement and acceptance of all people.