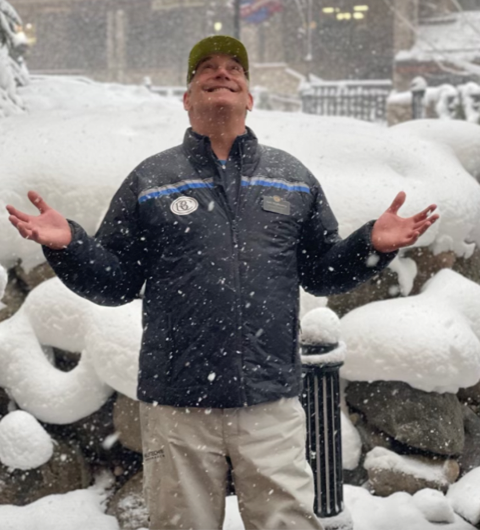 Gary was born September 20, 1964 to Herman and Barbara Shimanowitz in New Jersey. Baby Gary was instantly loved and cared for by his older sisters Helene and Sandy. At age 7, Gary and the family loaded up into ’72 Chevy Bel Air and headed out to Colorado from New Jersey.On the drive, Gary would sit on his dad’s lap and steer while they were on the freeway. This is where he developed his love for speed. Once the family settled in Denver, Gary was a true Colorado kid. Inspired by his dad Herman, he developed a love of sports, in particular football and baseball. The family had memorable trips fishing in the Rocky Mountains.

At age 17, he was devastated by the loss of his father. After the services, he was comforted by his sister Helene and her husband David, who took him sailing to be together as family. Starting then, he was the Rock of his Family, a role he never relinquished. Gary graduated from Cherry Creek High School in 1982 and proceeded on to college at the University of Colorado. He graduated with an Economics degree and began working at a “real job.”

In 1990, Gary made a career decision that would profoundly impact his life - he joined Vail Resorts in Beaver Creek as a ski patroller. Over the next 31 years, his VR career included numerous accomplishments: Ski Patrol, Heavy Equipment Operator for Capital Projects, Snow Maker, and Director & Vice President of Mountain Operations. Gary was vital to the growth of Beaver Creek and was instrumental in the creation of the famous Birds of Prey downhill World Cup Race, and Grouse Mountain.  Not surprisingly, Gary was also experienced with explosives- both as a summer explosive tech and for winter avalanche mitigation. Having fun with his mountain family included long friendships with buddies and growing families, skiing powder on beautiful mountain mornings, relaxing at the Coyote after a long day of work, and enjoying great food with those he loved.

In 2009, Gary changed venues with Vail Resorts and for the next eight years functioned as Director of Mountain Operations at Breckenridge. Among many accomplishments, he was instrumental in expanding the resort footprint by implementing Peak 6. In September 2017, Gary returned to Beaver Creek as Vice President of Mountain Operations. Most recently he played a key role in the development of McCoy Park, a new ski area devoted primarily to families.

Over his 31 years with Vail Resorts at these two premier skiing locations, Gary developed a wide variety of friends and work associates, with a strong bond characterized by friendship & respect. Gary was loved and respected by everyone who knew him. He was called “Uncle Gary” by many of his friends’ children, making sure to show them individual attention and a great time. He was there for their big moments including graduations, sporting events, and theatrical performances. Even though Gary hadn’t lived in Denver since 1990, he always maintained his friendships with his boyhood friends from Walnut Hills.

Apart from his extensive career in the Colorado mountains, Gary would always find time to be an important part of his family’s life. He supported and comforted his sister Helene when she was going through challenging health issues. Starting in the mid-80’s, he would often travel in The Mighty Mighty Pathfinder to Phoenix and Tucson to see his sister Sandy, brother-in-law Mark, niece Rachel and nephew Joe. He was there to welcome each child shortly after their arrival. He stayed for three weeks after Rachel’s birth helping Sandy run errands – she referred to him as her “house boy.” He cheerfully attended birthdays, dance recitals, bar mitzvahs, graduations, and many other major occasions.

Gary’s early visits were often made on the back of a powerful 1200 CC Ninja motorcycle, wearing leather jacket and chaps. He would proudly exclaim “I only stopped for gas!” and “I was doing over 100 for long stretches of the trip!” In Arizona, he took family on thrilling motorcycle rides in the mountains outside Tucson. One time, he even strapped his golf clubs across the back of the bike. Of course, the family reciprocated and visited Gary frequently in the Beaver Creek and Breckenridge areas for family fun, hiking, skiing, and enjoyment of the High Country. Family trips included great vacations to Lake Powell, Hawaii, and the Caribbean. His nephew Joe spent a year living with him in Breck while working as a lift operator. Gary never failed to show everyone generosity and kindness.

Although a busy mountain man, Gary never once forgot about his mom, Barbara, in Denver. His regular visits to Denver included caring for her residence inside & out, maintaining her car, and generally seeing that all was well. These visits usually ended with a rewarding trip to the local Outback restaurant for mom and son.  They loved each other deeply, and he often referred to her as “the Apple of my Eye.” He would do anything for her. At his niece Rachel’s wedding, he proudly walked with his mom down the aisle.

From the moment Gary stepped on the mountain as a young ski patroller to his last moments after skiing first tracks, he loved “his” mountain and all his friends.