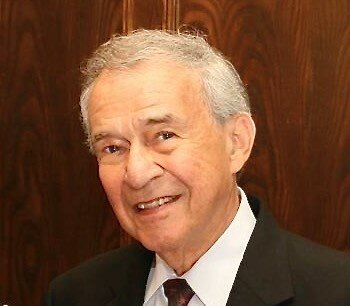 Leslie Alan Mendelson died peacefully at 98-years-old at his home, Wednesday, September 29, 2022. Les was born and raised in San Francisco, California where he graduated from Lowell High School in 1942. He proudly served our country from 1943 to 1946 in the Navy and was decorated for his service in the South Pacific theater of World War II.

Upon his honorable discharge, Les ventured out to Las Vegas in the early 1950s where he worked in the gambling industry. After marrying his beautiful wife, Carol, they moved to Los Angeles, where he founded his own brokerage operation in the paper recycling industry. By the early 1980s, the company had grown, and Les had experienced tremendous success. While the business was one passion, his true love was for his wife Carol, with whom he shared a 59-year love affair, and their daughter Stacy. He and Carol traveled the world together and spent summers in Scotland for 15 years -- their paradise home away from home.

Les was a family man first, a patriot, and was often described as the last true romantic. With his humble, upbeat, and encouraging nature, he enriched the lives of everyone he met. He loved to play golf and dote on his grandchildren; he was a true friend to so many, and a generous philanthropist.

Les was predeceased by his wife Carol in 2018 and his son Stephen in 2006. He is survived by his daughter, Stacy (Jeff) Robinson, his loving grandchildren: Joe Preblud, Anna Preblud, and Tucker Robinson, and his nephew David Kourlas of CA

A funeral is scheduled for Tuesday, October 4th, 10:00am at Quebec Place at Fairmount, 430 South Quebec Street; interment will immediately follow in Emanuel Cemetery. A livestream will be available on Feldman Mortuary’s YouTube channel.

In lieu of flowers, contributions may be sent to The Carol Mendelson Alzheimer’s Disease Research Fund, Fund # 0221060 giving.cu.edu/fund/write-fund, or to the Carol Mendelson Memorial Fund at the Barbara Davis Center for Childhood Diabetes www.childrensdiabetesfoundation.org/donate/

In the words of Les: Bye For Now.