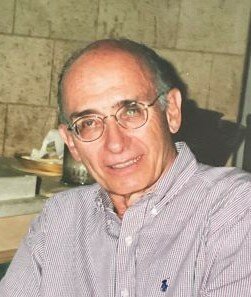 On September 29, 1933, Frank Stanley Schneider (Ephriam ben Nachman v’ Mindel) was born in Denver, Colorado.  As he grew up, he celebrated his bar mitzvah, attended Denver North High School, got his bachelor’s degree from University of Denver, served in the U.S. Army, got his MBA from DU and became a CPA.  (Not all at once, mind you).

Dena and Frank had three children, Brad, Kim and Tracey (Tracey will argue the child thing improved each time, though all are wonderful.) He was incredibly proud of his family, and certainly our achievements and successes. But he was most proud of our choices in life partners (Julie, Charles and Harry) and his truest love and pride, his eight extraordinary grandchildren—Adam, Daniel, Isaac, Max, Eli, Molly, Henry and Jacob. Each grandchild was his favorite in their own distinct way. His favorite, without doubt however, was Sam.  (Sam was the golden retriever who replaced Brad when he left for college).

Frank was a wonderful father who taught more by example than words.  His lessons were: be honest, work hard, give your all, never quit, love your community, love Israel and serve others. He taught that you can do and be anything, as long as you put your heart and soul into achieving your goals. He gave each of us the freedom to pursue our dreams and stood by us and took pride in us—and his grandchildren—every step of the way.

Frank started his professional career in public accounting, rising to managing partner before merging with a national firm in 1969, and then starting his own firm, Schneider and Schuster, in 1976. Eventually he transitioned to family business consulting and opened Schneider Consulting Group (SCG), helping businesses and families prosper and thrive. He quickly became a national thought leader in this emerging field.

Brad worked with Frank and SCG for two years in the 1990s and then Kim was his business partner for two decades. Together they built not only a respected brand but, more importantly, lifetime friendships with their clients.

Beyond family and profession, Frank loved sports.  He was on his high school tennis team, played competitive hand ball (that’s a thing), skied in everything from leather boots and wood slats to ultimately comfy boots and high-tech skis. In midlife, he discovered bicycling which became his life’s passion.  He joined many multi-day mountain bike rides including Schlepp the Slopes and Elephant Rock. He travelled around the country competing in the Senior Olympics and founded the Colorado Bicycle Racing for Seniors (COBRAs) bike club. Into his 80s, Frank competed in the Cherry Creek Criterium races.

Frank also loved food, all kinds of food, and it was not necessary that it be good food. He had a particularly insatiable appetite for desserts. And again, not necessarily good desserts. But no one enjoyed a meal more, and a meal was always more enjoyable surrounded by family or friends.

Last, but not least, Frank was a lifetime learner.  He especially enjoyed OLLI (Osher Lifelong Learning Institute). He loved the classes, and loved even more sharing his passion for each class with his friends.

Our parents’ 62+ years together is an inspiration for all of us. Our dad’s joy for life, his perseverance, sacrifice, integrity and resilience all had a profound influence on each of us, our children, cousins and friends. We already miss him terribly, but he lives on within each of us and his grandchildren.  We expect he will be in heaven wearing his COBRAs bike jersey and looking for riding partners.  He will also likely be complaining about the Broncos trading for Russell Wilson.

May his memory be a blessing.