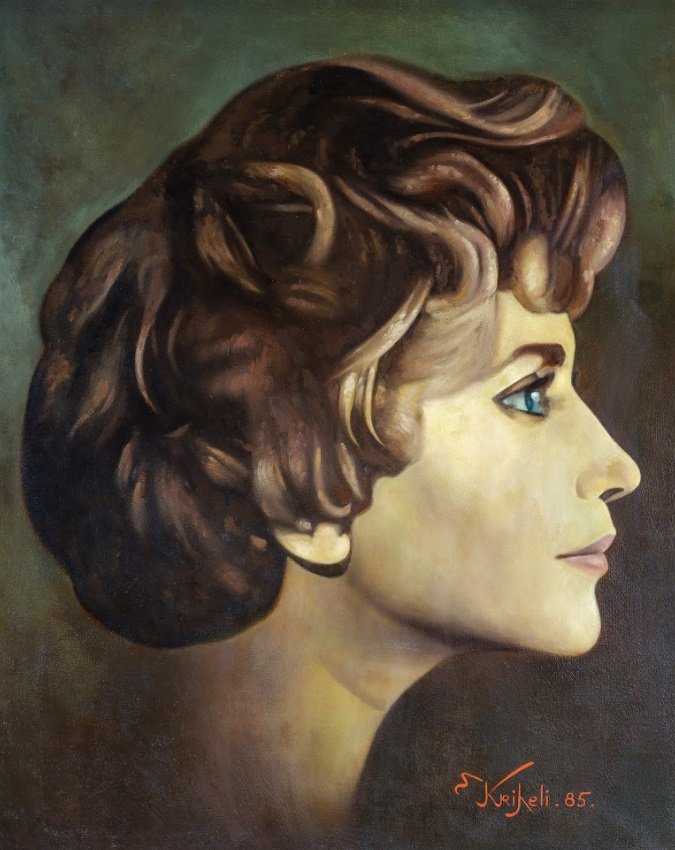 Mina Litinsky was born November 4, 1936 in Leningrad (St Petersburg) Russia. Her father, Yevsey Ratner, was a renowned architect, pianist and a decorated Russian Army Officer twice wounded in combat in WWII. After the war Yevsey returned from the front to rebuild Leningrad following 900 days of Nazi siege and bombing. He led the team building and restoring Leningrad’s famed underground subway stations. Yevsey Ratner rests in repose in Mount Nebo Cemetery in Denver since 1987.

A pioneer and rebel from early on, Mina forged her ID papers, and at 16, became a Soviet Skydiving Instructor. In spite of her diminutive size, in university, Mina was the number 2 rated fencer in Leningrad, as well as 2nd place holder in the 3,200 meter run.

Mina’s first love was always the arts world, although she received a Master’s degree in Organic Chemistry and worked at the St Petersburg Forest Technical Academy. In the late 1960s and early 1970s, Mina became involved in organizing several underground art exhibitions, and her one bedroom apartment transformed into the focal gathering point/salon for writers, cinema stars, musicians, and artists, with coffee and a pot of soup always on the stove. Mina's door never closed, she helped out the artists - many ostracized and destitute - in every way she could and formed unbreakable, lifelong bonds with her “starving contingent” who often stayed for days and gifted her with unique artworks in heartfelt gratitude. At night, classical music was replaced by radar jammed sounds of Voice of America and Radio Free Europe.

The Litinskys arrived in Denver, Colorado in 1980, with no English, a sumtotal of $74 and several rolled-up paintings.

Mina opened her Sloane (Russian for Elephant) Gallery of Art in Denver’s LoDo section, which at the time was a rundown warehouse district by the traintracks. Her gallery was the first in LoDo.

In 1982 Sloane Gallery relocated to 1612 17th Street in the historic Oxford Hotel Office Building across from Union Station until Mina's retirement in 2016.

Mina inspired many of her artists who did not adhere to state approved mandated “Socialist Realism” in the USSR and were thus cast out to the fringes, to leave the country to pursue their dreams in freedom. Once again Mina supported them through the transition to a new way of life and helped launch and directed  their careers as artists in the West. These emigres were totally unknown in the West, yet because of these artists’ genius and Mina’s vision and tireless efforts, the artists were soon exhibiting worldwide and accepted into the permanent collections of the major art museums of the world: Guggenheim Museum (NY), Metropolitan Museum (NY), Museum of Modern Art (NY, San Francisco), Whitney Museum (NY), Zimmerli Museum (New Jersey), Peter Ludwig Museum (Cologne; Budapest), Russian State Museum (St. Petersburg), Moscow’s major museums, Stedelijk Museum (Amsterdam), Center Pompidou (Paris), and the Vatican Museum Permanent Collection. The world’s largest sculpture atop Aswan Dam in Egypt, which had its artist’s design chosen by an international jury, was created by Ernst Neisvestny, an artist Mina showcased throughout his entire career in the West. Many of Mina’s artists were invited to exhibit at the world’s preeminent showings such as the incomparable Venice Biennale. When Mina believed in an artist, she helped propel them to the heights of worldwide acclaim.

In 1988 Mina received a major award, a ceremonial LoDo brick, from Mayor Federico Pena for making the city of Denver beautiful and unique.

The US State Department G8 Summit in June 1997 in Denver was an important multi-nation event during President Bill Clinton’s presidency. During this G8 Summit, on Sunday June 22, 1997, the Russian FSB cordoned off Denver’s 17th Street from Wazee to Wynkoop with their automatic weapons at the ready to allow Mrs. Boris Yeltsin, wife the President of the Russian Federation to visit the Sloane Gallery. Those who greeted First Lady Naina Yeltsina were Mina, the artist who painted the portrait of her husband President Boris Yeltsin (installed in the Kremlin) and Wayne Yakes, MD. Mrs. Yeltsin enjoyed herself thoroughly with Mina at the Sloane Gallery, even extending the time of her scheduled visit to learn about all the artists on display.

The famed Russian Master Marc Chagall was to do an exhibition at Mina’s Sloane Gallery of his private collection of works. However, Mina received a telephone call from Chagall’s wife Valentina from St. Paul de Vence, France on March 28, 1985 with the sad news that Marc had passed.

Mina’s reputation among her many artists, clients, business associates and countless friends from all over the world was that of a loving, incredibly erudite, highly humorous and demanding no nonsense “Godmother of the Arts”.

A true American success story, Mina's personal motto was always "Not Because Of, But In Spite Of".

To her very last day, Mina was a true American Patriot, a believer in, promoter and defender of the American values and way of life. Her proudest moment after the birth of her son Gene in 1967 was taking the American Citizenship Oath in 1984. Mina was a donor to numerous charitable organizations and supported the US Armed Forces, US Veterans, Jewish and children's causes. Mina remained one of the strongest supporters of President Trump and was recognized by the White House for her contributions on numerous occasions.

The Colorado art community, the international arts community, and thousands of people throughout the world were touched, helped and inspired by Mina Litinsky. Mina's legacy lives on and she will be remembered as one of the brightest lights making the world a more beautiful place.

Services will be held at Feldman Mortuary on Monday October 5, 2020 at 5pm.

Mina Litinsky is survived by her son Gene Litinsky, her niece Lera Ratner, her Goddaughter Alexis M. Yakes, and Godson Eric A. Yakes.