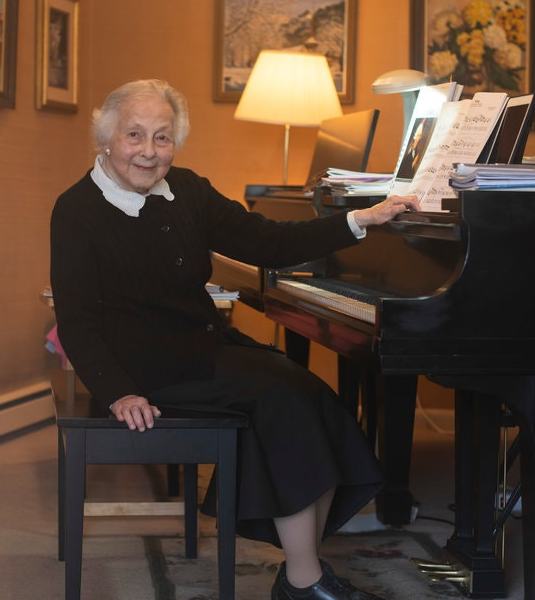 Dr Cornelia (Nellie) Vertenstein (nee Iancu) passed away at the age of 93 on 12 February 2021 after a brief illness. Born in Sibiu, Romania, she began playing piano as a child, quickly establishing herself as a great talent. At 14, she began giving lessons, which became her greatest passion and life’s work.

Nellie displayed an amazing adaptability, resilience, and ability to learn over her whole life. After surviving the holocaust in her early teenage years, she continued her education, and became known as a respected concert pianist in Bucharest. In 1961, she, her husband, and her young daughter were forced to flee communist Romania and make a harrowing journey to Israel. Two years later, they immigrated to the United States, settling in Denver, where Nellie built a successful piano studio.

Nellie never stopped teaching. She was fluent in six languages, and learned Hebrew, then English, in order to continue her work. In 1980, she earned her Doctorate in Music from the University of Colorado, and throughout her 79-year career, she continuously adapted her style, exploring new pedagogical methods in a mission to instill a deep love of music and learning in her students. Nowhere was this more evident than during the pandemic, where despite her relative inexperience with technology, she quickly learned to give lessons over FaceTime, moving her entire studio online at the age of 92. Always a woman of incredible strong will, she gave one last piano lesson just before going to the hospital for the final time.

Nellie is survived by her daughter Mariana Vertenstein and son-in-law Steve Goldhaber, her grandchildren Tanya and Daniel Goldhaber, her nephews Michael and Mark Yaron, and the thousands of piano students whose lives she immeasurably enriched.

Service will take place on Tuesday, February 16th at 1:30PM. Due to COVID-19, the family formally requests that the burial is attended by immediate family only, however, a public livestream will be viewable by clicking here at the time of the service- Feldman Mortuary's YouTube Channel

Share Your Memory of
Dr. Cornelia
Upload Your Memory View All Memories
Be the first to upload a memory!