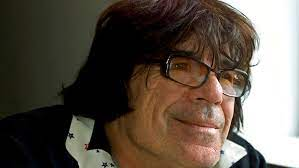 Chuck E Weiss, musician, actor, music historian, and sometimes comedian, died Tuesday, July 20th, in Los Angeles, CA. Chuck E was the leader of legendary underground band ‘Chuck E Weiss and the God Damn Liars’, he was part owner of the infamous Viper Room, along with his friend Johnny Depp, where he performed legendary music shows weekly, taught a class on music history at University of Colorado (one of the first of its kind), was the “Chuck E” in Rickie Lee Jones’ classic hit “Chuck E’s In Love”, had two of his albums produced by buddy Tom Waits, and after years of drug abuse, was an important leader in turning people around from the problems of drug and alcohol excess. His speeches at AA meetings in Los Angeles, were legendary. Chuck E was a unique character that always made us laugh, unbeknownst to many, he had funny parts in several tv sitcoms. Even though he may have never been given the recognition he deserved in the music community, for many, his persona and talent will live forever.

1:45 pm - 2:45 pm
Emanuel Cemetery
Address not given
Not Given, Colorado, United States