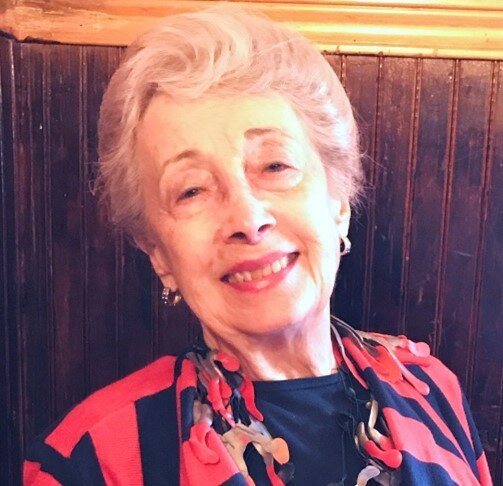 JoAnn Bock Schloss, born August 9, 1932 in Denver, Colorado, passed away at age 89, on May 27, 2022. She has rejoined her lifelong love and husband of 73 years, Charles Murdock “Chuck” Schloss, born September 26, 1930, who recently passed away at age 91, on December 9, 2021.  Together they grew-up, lived a full, interesting life, and raised a family, while never wavering in their deep love for one another, holding hands until Chuck’s death.

After raising three children and attending college with her two older children, JoAnn graduated from the University of Colorado, with distinction, Phi Beta Kappa.  JoAnn joined the City and County of Denver’s Commission on Community Relations, where she established the Commission on Youth while completing an advanced degree at night, honored in a Graduate Fellowship in Organizational Behavior and Communication.

She joined the private sector as an employee relations officer for Central Bank of Denver and was elected Vice President of Human Resources. Her team of professionals supported both Central Bank and 15 Central Bancorporation affiliates.

Dedicated to entrepreneurship and small business survival, JoAnn started her own business: Profitable Decisions, Inc., a research, consulting and training firm to serve local and national clients who were launching new ventures, focusing on successful survival and profitable growth, and desiring to foster leadership development, quality and service.

Concurrently, she was asked to become adjunct faculty for the Department of Communications for the University of Colorado at Denver, where she taught courses in communication, teamwork, business and professional speaking and conflict management, while serving her consulting clients.  She then moved to Regis University where, for 20 years, she was an affiliate graduate professor of business management for the Masters of Science in Management (later titled Organizational Leadership), accelerated learning program in the School for Professional Studies.  She taught courses in leadership, teamwork, change, business process improvement, strategy, leadership for the future and entrepreneurship and served as a mentor/advisor for student’s capstone project/master’s thesis as well as consulting with her business clients.

Always up for challenges, combined with a strong commitment to give, JoAnn served on many boards and organizations such as Leadership Denver, Colorado Women’s’ Forum, and SCORE (Senior Core of Retired Executives), where she became a certified client mentor and SCORE Denver Chapter Counseling Chair.

Self-described as an outlier, an activist, a leader and a futurist, JoAnn was always ahead of the times, exemplified by her style, taste, actions, conversational content and impact.  She put her heart, soul and being into everything that she did, never forced her ideas and beliefs on others, but led by example and flair. Her rare gift of attention to details, as well as seeing and projecting the big picture, resulted in the many awards and recognitions she received, including the Excellence in Teaching Award at Regis.  Her unwavering intelligence and thirst for knowledge was fed by her voracious reading and continuing education through Denver Eclectics and the University of Denver’s Academy of Lifetime Learning.

Future services and funeral arrangements will be announced.